In 1950, Bill Linderman of Red Lodge, Mont., became the first man in professional rodeo history to win three world titles in a single season, claiming the championships in the all-around, steer wrestling and saddle bronc riding.

Born April 13, 1920, Linderman won six world titles between both ends of the arena and was the first professional cowboy to win more than $500,000.

Always a leader, Linderman was elected to the RCA Board of Directors in 1947 when he was 27 years old. In 1951 he was elected president of the association and was re-elected annually until he refused to accept nomination in 1958.

Typical of his dedication, he qualified for the first National Finals Rodeo in 1959, but he withdrew from competition to serve as arena director to help ensure the success of the new venture. He served as secretary and treasurer of the RCA from 1962 until his death in a plane crash on Nov. 11, 1965, in Salt Lake City. 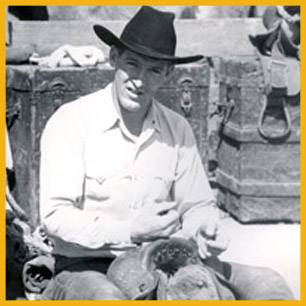