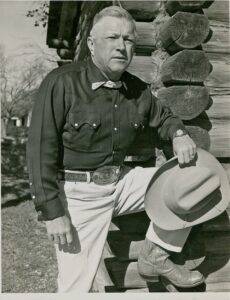 about a “world series” of rodeo. John, who had already had successful careers as a radio commentator, columnist, White House correspondent, political adviser, and public relations director, was intrigued. As his love and interest in the sport grew, so did his involvement, and it wasn’t long before he was being called the “Barnum of Rodeo.”

In 1958 John headed the newly formed National Finals Rodeo Commission and began laying the groundwork for the greatest sports showcase in professional rodeo. His skills in understanding and communicating with people, along with his humor, warmth, and tough “let’s get-it-done” attitude, allowed him to introduce the sport more broadly throughout the United States and have it accepted and treated as a professional athletic sport by the media. In 1959, he was responsible for the highly publicized meeting between President Dwight Eisenhower and rodeo officials that has been called “the finest single news event in the history of rodeo.”

John VanCronkhite was able to create the forces and influence needed for the professional sport of rodeo to fulfill its dream of a world series. He was producer and general manager of the very first one held in Dallas in 1959 and he continued to direct it until 1961.

Even with all his accomplishments in the news, political, and public relations arenas, John was prouder of his part in establishing the National Finals Rodeo than anything he had undertaken. He wrote, “I do feel that in giving birth to this—one of America’s lasting great sporting events—that I can achieve the only lasting fame of which my grandchildren can point to with great pride.”

It is because of this foresight, influence and vision and the groundwork that was laid for a successful National Finals Rodeo for many years, that we honor John