Ken “Speed” Williams was born and raised in Jacksonville, Fla. He started roping before he could walk, and by the time he was 14 he had a bank account full of winnings. Williams bought his PRCA card in 1988 and competed in the Southeastern Circuit calf roping and team roping, as a heeler. He won the 1995 Dodge National Circuit Finals All-Around title.

Williams made his first trip to the National Finals Rodeo in 1988 heeling for Casey Cox. After that experience, Williams went home and switched to heading. He believed there were more improvements to make to that side of the event. Williams credits hard work, lots of practice and discipline with his success. He is credited with starting a new style of swinging the rope in the box, and his style of catching lowered times and won money.

Williams partnered with Rich Skelton in 1997, and the rest is history. The pair won eight consecutive Team Roping World Titles. “I don’t think there was any secret to our success,” Williams said. “We came together at the same time and we had the same desires and we wanted to rodeo and that’s what we did every day, but I never even dreamed that we would win eight gold buckles in a row.”

Williams, who qualified for the Wrangler National Finals Rodeo 15 times (1988, 1994, 1996-2008), is one of only seven team ropers to make it to the NFR as both a header and a heeler. Williams has spent his time off the circuit helping other ropers with schools and online educational videos that number in the thousands.

“I remember going to the high school finals and stopping in the ProRodeo Hall of Fame and I was blown away with the history of ProRodeo,” Williams said. “It’s a great honor to be inducted into the Hall of Fame. Rich and I had a fairytale career, and words don’t really describe how I’m feeling.” 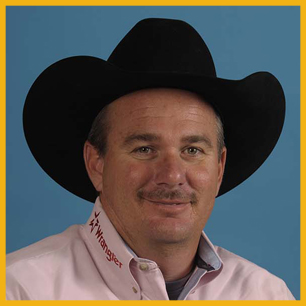