*Inducted as a pair with Robert Christensen.

Henry and Robert Christensen, with their sister, Babe, began staging backyard Sunday rodeos in the 1930s. Their bucking broncs were horses that had worked all week and their Brahmas were cows. They charged a dime for admission. Henry was born Oct. 15, 1911, in Lake Creek, Ore., and Robert was born June 18, 1913, in Eugene, Ore. In 1936 Christensen Brothers contracted for their first “paying” rodeo, driving the stock 60 miles by horseback. Christensen Brothers Rodeo and Stock Company grew to 15,000 acres and became known as a company that helped develop the sport as we know it today. Over the years, the CB string produced broncs of the year, War Paint and Checkmate; bareback horses, Smith and Velvet; and bull, Oscar’s Velvet (son of Hall of Famer Oscar). For more than 50 years, Christensen Brothers trucks and trailers kept in tact the dirt arenas of the Pacific Northwest and Western circuit. Henry died April 10, 1986. 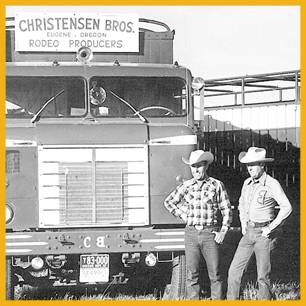