Garrison took a scholarship to Oklahoma State University where he was a two-time All-Big Eight honoree. After completing his eligibility for football, he spent a year with the Oklahoma State rodeo team. Garrison was drafted in the fifth round by the Dallas Cowboys in 1966.

Garrison made sure that his Cowboys’ signing bonus included a two-horse trailer so he could still attend rodeos. Coach Tom Landry stopped Garrison from competing in nearby rodeos the night before a game by allowing him to follow the rodeo trail in the offseason. The highlight of Garrison’s rodeo career was placing fifth in the steer wrestling average at the 1974 Cheyenne (Wyo.) Frontier Days.

After a torn knee ligament that ended his nine-year football career, the Texas cowboy became instrumental in the U.S. Smokeless Tobacco sponsorship in ProRodeo and in the programs they supported – the livestock naming program, sponsorships for individual cowboys, and scholarships for college rodeo athletes.

Garrison went on to combine his stardom with football and rodeo to raise more than $4 million for multiple sclerosis with his Walt Garrison All Star Rodeos over the course of 20 years. His charitable involvement also included, at the time of his induction, serving on the board of directors for the Justin Cowboy Crisis Fund for over two decades.

“His first love was rodeo, no doubt, ever since he was really young,” said his son, Marty Garrison. “That’s what he would have done had he not played football in college and then got drafted by the Dallas Cowboys. His whole life, his love was rodeo.” 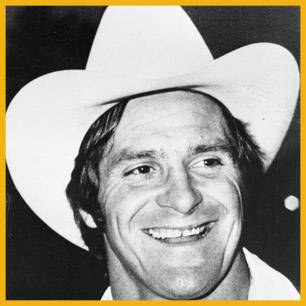