For an unknown horse that was brought to a steer wrestling school, no one would have guessed how tough a rodeo competitor he would turn out to be. AQHA registered Mighty Eye “Whiskey” would turn out to be one of the toughest horses three-time Steer Wrestling World Champion Roy Duvall ever owned.

Carlis Bartholomew wanted to become a better steer wrestler and decided to attend one of Duvall’s steer wrestling schools in the early 1970s. He brought along a fine-boned, chestnut horse with a little white star on his forehead. Duvall took a liking to the horse and bought him, after six months of negotiating, for around $7,000 – a lot to pay for a horse at that time. Most thought he was crazy to put such an investment into a green horse with such a small stature who probably would not last very long.

Duvall trained Whiskey and hauled him for nine years, taking him to some of the largest rodeos in the country. Whiskey would prove to be one of the toughest competitors in the sport. He once made 60 plus runs in Fort Worth on one day and at another time went to Houston where he made another 50 plus runs. Duvall never turned down a cowboy who asked to ride the horse, or any of his horses for that matter. Whiskey never seemed to tire and often it was the cowboys riding him later in the day that would earn the paycheck.

Whiskey’s reputation grew and he was awarded 1980 Steer Wrestling Horse of the Year. Duvall retired the horse sometime in 1981. After his retirement, Whiskey went back to live with his original owner Carlis Bartholomew. 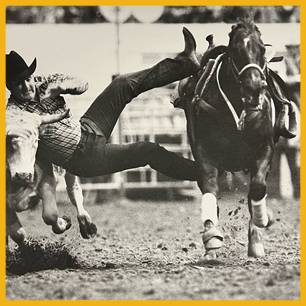