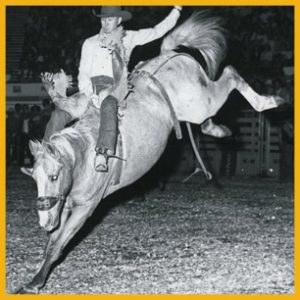 When owner Bobby Christensen first started bucking the horse, Smith & Velvet would be good for five or six seconds, and then he would spin and stop.

A lot of people told Christensen to get rid of the horse and that it would never reach its full potential. Instead, Christensen stayed the course and turned Smith & Velvet out for a few years.

The horse’s comeback tour was complete when Christensen entered him in Oakdale, Calif., in the late 1970s, and he bucked off World Champion Jack Ward. From then on, Christensen knew he had a good horse, and the animal’s career took off.

Smith & Velvet died in 1983 in a tragic truck and trailer accident that killed many of Christensen’s prized NFR horses.

“He was the bread and butter of our company for many years,” Christensen said. “I always hoped the call for him going into the Hall of Fame was coming, I just didn’t know when it would.”