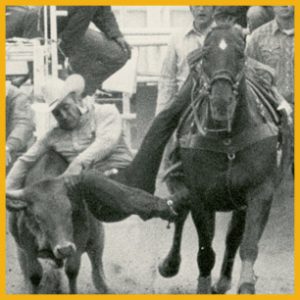 Scottie, who was owned by Walt Linderman, carried three different cowboys to four world championships – Harley May in 1965, Jack Roddy in 1966 and ’68, and John W. Jones Sr. in 1970, when he rode Scottie as one of his mounts during the regular season.

The chestnut gelding was also responsible for winning six average titles at the National Finals Rodeo between 1964 and his final appearance in 1973. He also helped Linderman finish second in the average three times.

For good measure, Scottie carried Lynn Perry to the College National Finals Rodeo championship in 1971, and the horse helped win the high school national title in 1977 for Troy Yetter.

Linderman bought Scottie in 1964 as a hazing horse for $1,600, but when his bulldogging mount, Mama, was injured, he rode Scottie to a win in his first rodeo.

Jones, a ProRodeo Hall of Famer who died in 2013, said in a 1973 Hoofs and Horns article, “Scottie is the all-time great steer wrestling horse in my book. He’s the best horse to mount people because he can take so many runs without tiring. It seems like the more runs he makes, the stronger he gets. There’s no horse I’ve ever seen that was in his class.”

An estimated $2 million was won on Scottie, and during a streak of nine consecutive NFR appearances, no fewer than five – and as many as eight – of the 15 finalists chose Scottie as their mount.