Medicine Woman, a bay mare out of Big Medicine (sire) and Showtime (dam), is the second most decorated bucking horse to date. Only Descent has more titles than she does. Born in Freedom, Oklahoma, in 2003, this ranch-raised mare never had a bad day. She was consistent in style and strength, giving every cowboy that drew her an equal chance at a payday.

During Medicine Woman’s career, she helped numerous cowboys score in the 90s. She is the only horse to win the 5th Go-Round of the NFR with a 92 score by Wade Sundell and the 10th Go-Round of the same rodeo with a 92 score by CoBurn Bradshaw. These scores helped Sundell clinch the 2018 World Championship Saddle Bronc Rider title and Bradshaw win the National Finals Average title.

This four-time Saddle Bronc Horse of the Year (2011, 2014-16) retired at the top of her career in 2020 after competing at her twelfth National Finals in Arlington, Texas. She entered Frontier Rodeo’s breeding program and had her first colt on Mother’s Day, May 9, 2021. Sadly, she passed away at her home in Freedom, Oklahoma, on December 9, 2021. 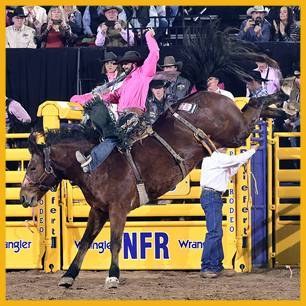 Top Stock of the Year