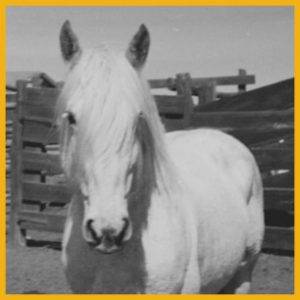 Gray Wolf never went to the NFR, but he was among the best sires owned by the legendary Tooke family.

Gray Wolf produced the most award-winning horses that can still be seen today in strings from Vold to Beutler to Sankey and Rosser.

Horses that go back to Wolf are: Lunatic Fringe (Burch), Miss Congeniality (Powder River Rodeo), Grated Coconut (Calgary Stampede), Chuckulator (Sutton), along with many others that can be seen in arenas today.

In 1987, two of Gray Wolf’s offspring – Guilty Cat and Challenger – and his grandson, Kloud Gray, all took home awards for PRCA accomplishments.

Feek Tooke, the patriarch of the family and a 2008 inductee of the ProRodeo Hall of Fame, nearly made the disastrous decision of selling Gray Wolf early in the horse’s life, but came to his senses. Feek’s son, Ernest, said, “I don’t know what dad was thinking, that $30 sale would have changed the whole face of rodeo that would have still been felt today.”