Retired at the top of his game in 2010, Grated Coconut is continuing the Calgary Stampede Ranch Born to Buck program. Of his children, at least 45 are competing at the top level of rodeo athletes with several qualifying for both the National Finals Rodeo and the Canadian Finals Rodeo.

For a horse feared by many cowboys, Grated Coconut was very social and gentle outside the arena. He enjoyed scratches from the cowboys before competition and has even let toddlers sit on his back. Grated Coconut became a top rodeo animal ambassador. Visitors to the Calgary Stampede Ranch were able to socialize with him before watching him explode into a rodeo arena. The pairing of his power and intelligence truly made him one of the great rodeo athletes. 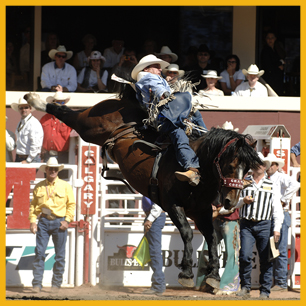 Canadian Stock of the Year