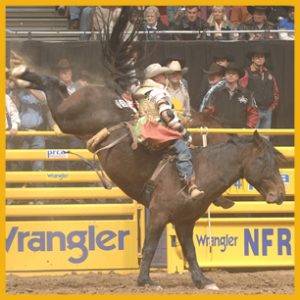 Commotion was born and raised on the Beutler and Son Ranch near Elk City, Oklahoma. His mother was Spooky Movie who went to the NFR. His sire was part of a racing horse breeding program. Commotion was bucked four times as a 4-year-old and sent all four riders to the ground. At the height of his career, Commotion had a 75% buck off rate. If a cowboy managed to make it to the whistle, he usually made the pay window as well. Bennie Beutler was often quoted as saying that Commotion never had a bad trip and even on an off day the cowboys still won money.

Commotion retired at the 2006 National Finals at the age of 15 and entered the Beutler and Son breeding program fulltime. He sired more than 80 foals who have gone on to compete at the NFR. Two of his daughters – Killer Bee and Wound Up – have won top saddle bronc honors.