Lucia began developing pantomime acts, a matador act with “bull” dogs, and many others to help fill the gaps between rodeo events. He brought tears to many eyes with In His Glory and In His Glory 2, both jet-black swayback dancing horses. Probably his most notable act was Whiplash, the Cowboy Monkey. Whiplash, a Capuchin monkey dressed as a cowboy, rode a border collie into the arena to herd sheep. Whiplash became so popular that he was booked to star in Taco John’s and Dairy Queen commercials, has appeared on Good Morning America, ESPN, and The Today Show, and became a viral hit on YouTube.

Lucia also did some movie work. He was an extra and the bull fighter in Junior Bonner (1972) and The Great American Cowboy (1973). Lucia’s work earned him three consecutive PRCA Entertainer of the Year awards (2003-05). Lucia also worked the Texas Circuit Finals four times and the National Finals Rodeo as a barrelman in 1973. He also opened the National Finals with his acts five times. 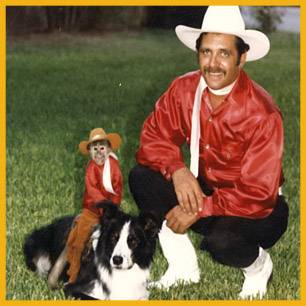 PRCA Specialty Act of the Year