Becoming a rodeo clown happened by accident when he was asked to fill in for a clown that didn’t show. Young agreed to continue working with the Kinney Brothers in their rodeos across Texas, Arkansas, and Louisiana. When they made the move to the professional ranks by joining the Rodeo Cowboys’ Association, Young went with them. Young transferred to Rodeos Incorporated before becoming a free agent and booking his own shows. This allowed him to be more selective on the rodeos he went to and gave him time to tend to his Appaloosa herd. Young has worked rodeos from Florida to Connecticut to Calgary and Hawaii.

Young prides himself on having covered all aspects of being a rodeo clown. He has fought some of the toughest bulls, been gored while in the barrel, and constructed some of the best acts in the business. He has worked with broken ribs, a broken leg, a broken jaw, stitches, and plenty of bruises. Young was sponsored by Burger King for a time, they gave him a traveling van in return for making people laugh at appearances at their restaurants. 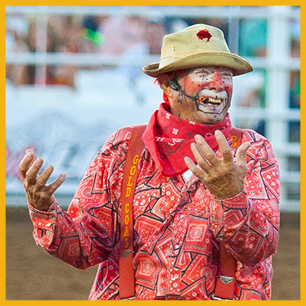 Clown of the Year