From chasing mustangs on the deserts of Arizona and Nevada, to a WPRA Barrel Racing World Championship, to roping and falling off horses in the movies Sammy Thurman Brackenbury did it all.

Brackenbury qualified for the National Finals Rodeo 11 consecutive times, winning the world title in 1965. The only daughter of PRCA cowboy Sam Fancher, Brackenbury became one of the first women to rope in an RCA rodeo when her father entered the team roping at the Santa Maria Rodeo and his partner failed to show. Brackenbury was entered in the barrel race, so Fancher got permission from the RCA for her to rope. While her father was a nervous wreck, his daughter handled it like a pro. In addition to Santa Maria, she was one of the first women to rope at California Rodeo Salinas, placing second in a round.

Crediting her father for many of her training techniques, Brackenbury became the first to hold barrel racing clinics from 1965-75 averaging 1,000 students a year. One of the techniques she pioneered was switching hands between the first and second barrel. The common practice at the time was to ride with one hand throughout the entire pattern, neck reining around the turns which created stiff turns. Brackenbury designed her own saddles and protective boots for her horse’s legs, equipment that did not exist at the time for barrel racing.

She served as the California Circuit Director, All Events Director, Vice President and in 1975 served a very short tenure as the President of the WPRA.

Living out West, she got involved in the motion picture business and in the late 1950’s starred in Horse of the West. Brackenbury doubled well known actresses such as Jane Fonda, Linda Evans, Kathy Bates, and Dolly Parton. She was a charter member of the United Stuntwomen’s Association. 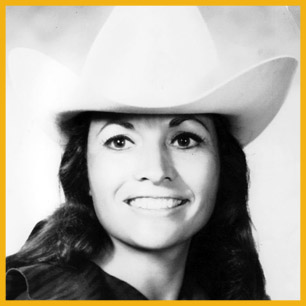