Martha Josey qualified for the National Finals Rodeo 11 times on six different horses across four consecutive decades. She won the WPRA barrel racing world title in 1980 on Sonny Bit O’ Both, the same year the duo also won the AQHA World Championship, a feat unmatched at the time of induction.

A highlight of her career was competing in the rodeo exhibition during the Cultural Olympiad at the 1988 Winter Olympic Games in Calgary, Alberta, that pitted the United States against Canada. Josey would ride away with an individual bronze medal and helped Team USA win the team title.

Josey was a true all around cowgirl riding bulls, broncs, cutting horses, tying goats and roping calves while competing in all-girl rodeos. In 1969, Josey won the reserve All-Around World Championship Title in the Girls Rodeo Association.

Not only did she make a name for herself in the arena but also gave back to the sport through her countless clinics. She and husband, R.E. Josey, started conducting barrel racing clinics in 1967 at their ranch in Texas and in 1981 began producing an all youth barrel race aptly named the Josey Jr. World Championship. Many of WPRA’s world champions credit Martha Josey with helping them achieve their goals. Her clinics grew to average over 2,000 students annually with students ranging in age from five to 80 and many returned yearly to participate in the annual Josey Reunion Barrel Race.

In addition, Martha and R.E. were involved in creating new and innovative barrel racing saddles, pads, protective boots, knot reins, and combination bits. The result has been increased safety and barrel racing skills for all barrel racers throughout the World. No doubt Josey made a big impact on the sport of barrel racing. 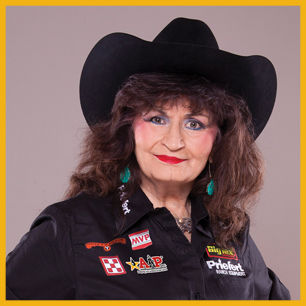