Billie Hinson McBride first saw barrel racing at an open rodeo event in 1937 and decided at 10 years old that it was the path she wanted to travel. McBride was a charter member of the Girls Rodeo Association (GRA), formed in her hometown of San Angelo, Texas, just over a decade later.

McBride would become the first superstar of the association to compete nearly exclusively as a barrel racer. The GRA was formed by ladies who often competed in multiple events, including roping and roughstock. Though she briefly tried roping, McBride dominated the GRA’s barrel racing in the late 1950s.

Picking up a reserve world championship in 1954, she went on the biggest streak of the young association’s history, winning four straight world championships from 1955-58 on her mare Zombie. That set a record that stood for three decades, not broken until Charmayne James, won her fifth title in 1988. In 1955, McBride and Zombie made 99 runs and only knocked over one barrel.

McBride also jumped into leadership roles with the GRA, serving 13 years as director including holding the president, vice president and secretary positions.

In her role as president, McBride spearheaded an effort to get the GRA barrel race included with the newly formed National Finals Rodeo to be produced by the Rodeo Cowboys Association. Though that proved unsuccessful, McBride secured a spot for the ladies with the National Finals Steer Roping, providing the GRA’s first season-ending championship event and paving the way for the barrels to make the jump into the NFR eight years later.

McBride passed away at the age of 90. 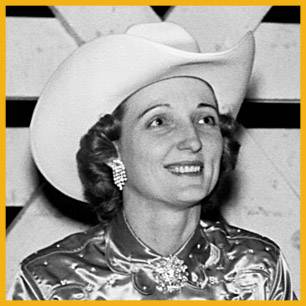