Ardith Bruce joined the Girls Rodeo Association (GRA) now the Women’s Professional Rodeo Association (WPRA) in 1960 reaching the pinnacle of the sport in 1964 when she won the world title aboard a horse known as Red, registered as Shaws Kingwood Snip. That same year, Red was the AQHA Reserve World Champion Barrel Horse and in 1965 was the first GRA/WPRA barrel horse to ever be featured in color on the cover of the Quarter Horse Journal.

Bruce and Red would become the first WPRA world champion duo to go to the left barrel first. They had been hitting some barrels, so Bruce decided to change things up and go to the left. From then on, if a set-up was better for the left horses, she would run Red left. If not, they went to the right.

Bruce was among the early GRA members to conduct barrel racing clinics and often traveled to Hawaii to conduct them. In addition to barrel racing, she spent a great deal of time on the racetrack and became the first female licensed outrider in the State of Colorado.

She gave back and remained loyal to the association for decades even after retiring from full-time competition. When the Association’s headquarters was moved to Colorado Springs, Bruce helped get things up and running. Her dedication and loyalty to the association carried over to the next generation with her granddaughter, Amber Bruce West, serving a term on the WPRA Board of Directors. 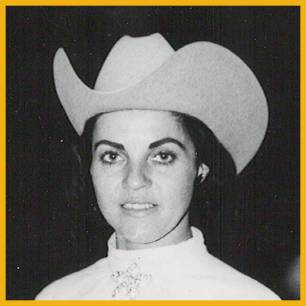