The lanky 6’1” tall cowboy started riding professionally in 1996 but waited until 2000 to make it a full-time career. He made his first of 15 consecutive trips to the National Finals Rodeo in 2001. He was sitting in the lead and only had to make a 10th Round qualified ride to win the World. He bucked off, losing the title to Lan LaJeunesse. The 2002 season saw a more determined Mote, and he won his first of four Bareback World Championships. After battling injuries, Mote easily won the 2007 World Title. And in a twist of fate, clinched the 2009 World Title and NFR Average Title in the 10th round with an 88.5-point ride. 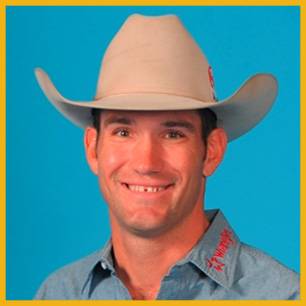