Austin “Buck” Rutherford hailed from the small northeast Oklahoma town of Lenapah. Rutherford lived as he rode – with fearless abandon.

After placing second in the world in the all-around in 1952, his destiny was soon altered. A devastating car accident in November of the same year left Rutherford in a coma with skull fractures.

Despite months of hospitalization, and doctors advising him to quit rodeo altogether, Rutherford returned for the 1954 season, miraculously winning the all-around title while becoming the first cowboy to eclipse $40,000 in cash and prizes in a single year. He edged out fellow ProRodeo Hall of Famer Jim Shoulders by $440 to win the gold buckle.

Though Rutherford never notched an individual event title, he finished Top 5 in the world standings 11 times between 1949-57 in bull riding and steer wrestling. 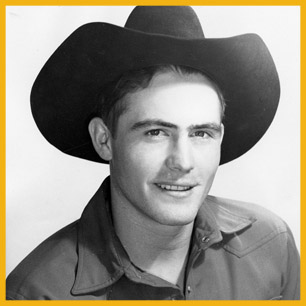