Bob Ragsdale was an all-around Montana cowboy, competing in steer wrestling, as well as calf roping and team roping. Qualifying for the National Finals Rodeo on 22 separate occasions, Ragsdale never won a world title, though his impact on rodeo has been profound.

Ragsdale, the Montana High School All-Around Champion in 1956, became an official member of the PRCA in 1961. At the time of his induction, he was one of only six left-handed tie-down ropers to qualify for the NFR, and he did so for 15 consecutive years from 1961-75. In that 15-year span, Ragsdale finished as high as fourth in the world, and never lower than ninth.

Despite his less-than prototypical frame, the 5’10”, 160-pound Ragsdale also competed at the NFR in steer wrestling five times, with two qualifications in team roping as well.

Ragsdale earned nine Top 10 finishes at the NFR in the all-around, including a second-place standing in 1972.

Ragsdale also served as both the Vice President (1971-72) and President (1973-75) of the Rodeo Cowboys Association, and is credited as the one to propose the association include “Professional” to the organization’s formal title in 1975. His work atop the association saw an increase in sponsorship and prize money, while also growing the number of PRCA contestants.

Ragsdale planted his roots in other ventures, such as running a construction and storage business for 25 years, modeling for Sears and Roebuck & Co. from 1973-81, and running steer wrestling and tie-down roping schools. 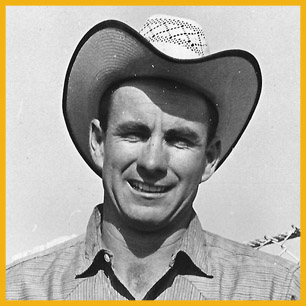