Louisiana cowboy Steve Duhon was a son of a horse trainer and part-time rodeo contestant. He became interested in horses when he was 5 years old, and it was that interest in horses and rodeo that led Duhon to a crossroads. He had to choose between football at Louisiana State University or a career on the rodeo trail. He decided he had a better chance for success in the arena. In 1985 that decision paid off when Duhon captured PRCA Resistol Rookie of the Year honors. The next year, he won the first of three world championships. Along the way to those championships, Duhon qualified for the National Finals Rodeo eight times, twice won the steer wrestling NFR aggregate title and established a Wrangler NFR record run of 3.0 seconds in 1986, a mark that was tied in 2001. 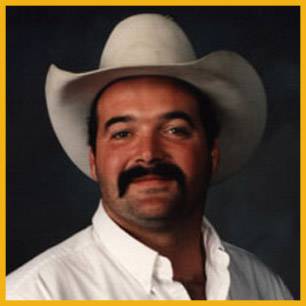