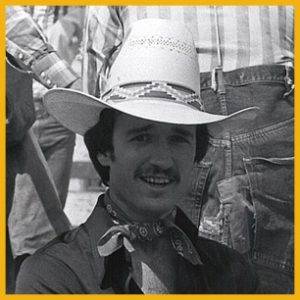 Three-time world saddle bronc riding champion Monty “Hawkeye” Henson became one of the most colorful and personable cowboys on the circuit and a master of the flying dismount. Born Oct. 22, 1953, in Farmersville, Texas, Henson grew up around Pete and Don Gay with his first association with rodeo in Mesquite, Texas. His style and ability have been compared to those of the legendary Casey Tibbs. He qualified for the National Finals Rodeo 14 times. Henson was quoted as saying, “I’m a cowboy. That’s the best thing anybody could say about me. If I could have that on my tombstone – Here lies Hawkeye, a cowboy – then I can die a happy man.”