Born June 4, 1933, in Bowness, Alberta, Wood’s first love was baseball. Although an early ankle injury took baseball out of the picture, it had no effect on his ability in rodeo.

He was known for his colorful style, which also included incredible balance and ability to anticipate the horses’ moves. Speculation is these two key skills were developed when he rode the jumping horses his father raised and trained.

The USA’s first glimpse of this talented rider was in 1953 when, as an amateur, he won saddle bronc riding and most of the day money in Omaha (Neb). 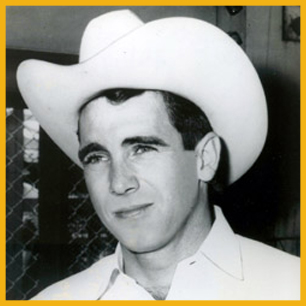