While Alvin Nelson of Grassy Butte, N.D., started his career as a three-event roughstock cowboy, he excelled at saddle bronc riding as a professional. Born on April 5, 1934, in Mobridge, S.D., Nelson turned pro in 1953.  During his 13-year career, he won a world title, claimed two aggregate crowns at the Wrangler National Finals Rodeo and qualified for the Wrangler NFR five times. He earned the 1957 world saddle bronc riding title, ending a string of six consecutive titles won by fellow Hall of Famers Casey Tibbs and Deb Copenhaver. Nelson went on to claim the aggregate title at the Wrangler NFR in 1961-62.  He also was the all-around champion of the 1961 Wrangler NFR. Nelson is also a member of the National Cowboy Hall of Fame and North and South Dakota Cowboy Halls of Fame. 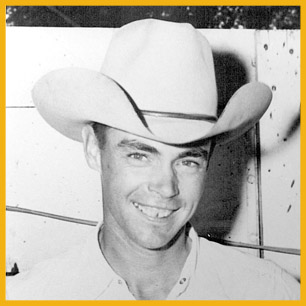