In 1946, Wilbur Plaugher was the all-around champion at the Madison Square Garden rodeo in New York. His clowning career was born later that year when he was asked to fill in as a bullfighter. He was the PRCA Clown of the Year in 1982. Plaugher rode saddle broncs and bareback horses, but steer wrestling was his specialty. For years, it wasn’t unusual to see him wrestling steers in his baggy clown britches and grease paint. For decades, Plaugher, born March 13, 1922, in Lima, Ohio, was one of rodeo’s funniest clowns. His most popular act included trained ducks and dogs that doubled as rabbits and fighting bulls. The crowd favorite was having monkeys aboard dogs run a competitive barrel-racing pattern. 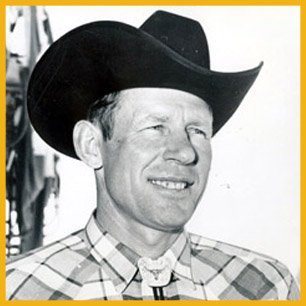