A 1993 Timex watch advertising campaign featured Charles Sampson as an example of “takes a licking and keeps on ticking.” His 16-year career became as well known for wrecks as championships. Sampson, born July 2, 1957, in Los Angeles, started riding ponies and steers at a Watts, Calif., stable and stock pen where he met some cowboys who helped him begin a rodeo career. He went on to become a rodeo role model, talented and charismatic both in and out of the arena. A near fatal injury during the 1983 Presidential Command Performance Rodeo left Sampson with shattering head injuries. The doctor’s prognosis: good for recovery and future in rodeo; participation in 1983 Finals not recommended without special facial protection. That protection became the familiar shot of Sampson coming out of the chute wearing a lacrosse helmet. Career wins included bull riding at the Turquoise Circuit Finals in 1985-86 and 1993, the Sierra Circuit in 1984, the Calgary bonus round twice, the George Paul Memorial twice, Pendleton (Ore.), and Salinas (Calif.). Sampson retired at the 1994 Dodge National Circuit Finals Rodeo. 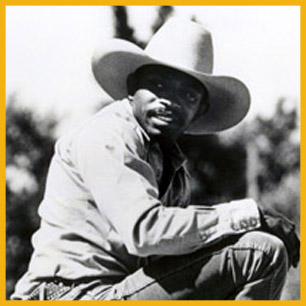