Joe Beaver grew up dreaming of being a professional rodeo cowboy. Beaver, born Oct. 13, 1965, in Victoria, Texas, began his roping career at the age of 5, roping goats from the back of a Shetland pony in his family’s practice pen. By 15, Beaver was making waves through the roping world. In 1985 at the age of 20, Beaver won the PRCA Resistol Rookie of the Year award and entered the National Finals Rodeo (NFR) in Las Vegas as the youngest tie-down roper. After 10 days of intense competition, he left Las Vegas with his first world title, and Thomas & Mack Arena became known as “the house that Joe built.” Beaver would return to Las Vegas many more times to collect four additional world tie-down roping titles and three world all-around titles. When injuries forced him out of competition for most of 1999, Beaver still made the trip to the NFR – this time as a television commentator for ESPN. He returned in 2000 to win his third all-around title, rallying from $75,000 behind. Beaver, still a force in the PRCA, has qualified for 22 Wrangler NFRs. 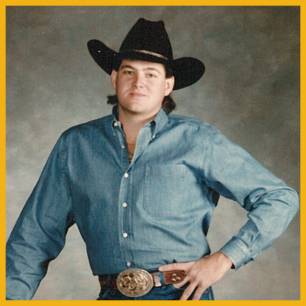